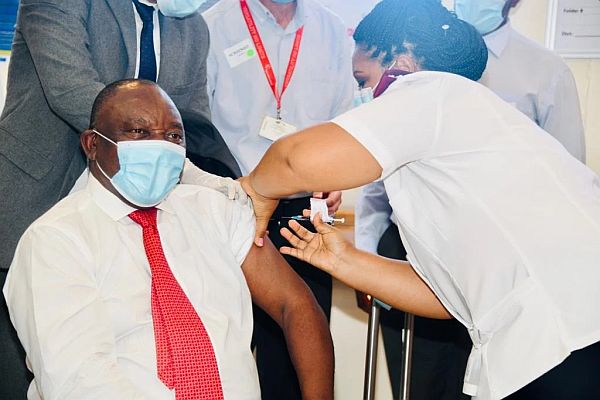 The Public Servants Association (PSA), the Southern African Policing Union (Sapu) and the Police and Prisons Civil Rights Union (Popcru) have all confirmed that they would oppose mandatory vaccinations. The Democratic Nursing Organisation of South Africa (Denosa) is still deciding on its position.

As South Africa continues to struggle through the pandemic with lower-than-expected vaccination numbers, and following the discovery of the Omicron variant, President Cyril Ramaphosa announced that a task team has been established to consult about making vaccination mandatory for specific activities and locations.

While the ANC-aligned Cosatu now backs a vaccine mandate, unions representing teachers, police, nurses and other public servants are weighing their options.

“We have taken a decision that we will not support another lockdown so if the only other option is mandatory vaccination, we will not oppose it,” said Cosatu spokesperson, Sizwe Pamla, stressing that workers must not be victimised in the vaccination process.

PSA spokesperson Reuben Maleka said the union has called on its members to get the Covid-19 vaccination – but warned that jabs should not be mandatory for public servants.

The PSA represents more than 235 000 civil servants including teachers and health workers.

“The PSA is concerned about the fact that government is mulling over possible mandatory vaccination for certain sectors. The PSA encourages its members to get vaccinated, especially those employed in the health sector, Correctional Services, the education sector, Home Affairs, and the SA Police Service where service delivery presents a high risk of exposure,” said Maleka.

Maleka said the PSA maintain that vaccination should be totally voluntary as many South Africans were “still afraid about the effects” of the vaccine and making vaccination mandatory will add to this anxiety.

“Government should step up its efforts to educate South Africans about the benefits and possible negative effects of being vaccinated rather than wasting resources on mandatory vaccination,” Maleka added.

Popcru spokesperson Richard Mamabolo said while there was great concern for government encroachment on individual rights seen around the world, the union encouraged its members and the public at large to receive their Covid-19 vaccines.

Mamabolo said the results of vaccinations among police officers in the union spoke for themselves: 32 000 union members were infected by Covid-19, but since vaccinations among members gathered momentum, there have been no deaths.

Denosa spokesperson Sibongiseni Delihlazo told Fin24 that the union did not yet have an official position on mandatory vaccines as yet, its national executive committee would meet next week to discuss matters including the mandatory vaccination proposal.

Delihlazo said that while the union advocated for healthcare workers to get the vaccine, it does not believe workers should be forced to take the vaccine.

“We said that they must be afforded the opportunity to make an informed decision on the matter,” said Delihlazo.

“It is our firm belief that no employee should be forced to vaccinate, as that will be against their rights and Sapu will explore all legalities around this matter in order to protect our members,” Sapu spokesperson Lesiba Thobakgale told Fin24.