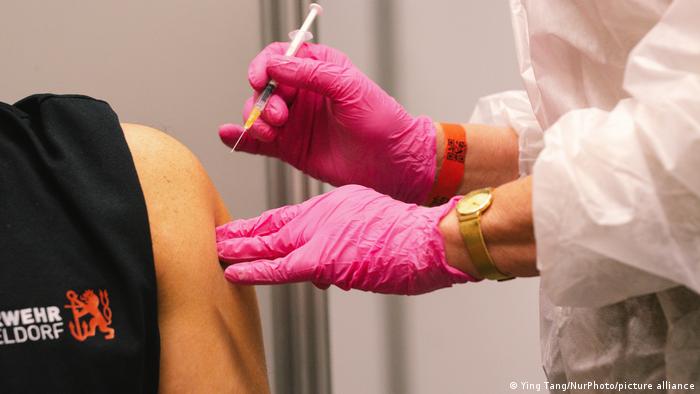 The head of Germany’s top vaccine body has said vaccine manufacturers would likely need a few months before they could create a vaccine for the omicron variant.

The head of Germany’s Standing Committee on Vaccination (StiKo), Thomas Mertens, said he did not expect possible new vaccines against the omicron variant of the coronavirus for months, according to a report on Saturday.

Mertens said it was entirely possible that a new vaccine would be needed to be effective against the omicron variant.

“Omicron has many changes to the spike protein, which could make it harder for antibodies to fight the virus,” he told the Düsseldorf-based newspaper Rheinische Post.

“Three to six months is likely to be needed by the manufacturers in the laboratory. That’s not trivial — they have to create a vaccine that works against omicron and delta because delta is still widespread,” he said.

Mertens also urged people to get booster shots despite a possible new vaccine.

“Boosters are definitely worth it. The fight against the delta variant continues,” he said. “And it would be no problem to get revaccinated a few months after the booster vaccination to protect against omicron if necessary.”

Germany has reported 64,510 new infections in the last 24 hours, while 378 more people died due to the coronavirus, according to the Robert Koch Institute (RKI). The new figures take the country’s total cases to more than 6.1 million, with at least 102,946 fatalities.

The seven-day incidence rose slightly to 442.7 from 442.1 the previous day, RKI reported.

Meanwhile, outgoing Chancellor Angela Merkel made what may well be her final appeal for people to get vaccinated, before leaving office.

In a video address Merkel called on Germans to get their vaccinations. “Get vaccinated, no matter whether it’s a first vaccination or a booster,” Merkel said. “Every vaccination helps.”

Merkel also lamented the loss of life as the country recorded another 378 deaths in a 24 hour period. “Every one of them leaves behind families or friends, stunned, speechless and helpless,” the outgoing chancellor said. “This is so bitter because it is avoidable. With the effective and safe vaccines, we have the key to this in our hands.”

Here are some more coronavirus headlines from around the world:

Police in Vienna, Austria, said “over 40,000” people took part in demonstrations against government plans to make COVID-19 vaccination mandatory and enforce a partial lockdown until November 22.

About 1,500 people held a counter demonstration against the main protest, police said.

A dentist in Italy who tried to get a vaccination using a fake silicon arm could face criminal charges of fraud, authorities said.

A nurse in the north Italian city of Biella discovered the phony limb as she was about to give the man the injection.

“I understood immediately that the man was trying to avoid the vaccination by using a silicone prosthetic, into which he hoped that I would inject the drug,” said the nurse, Filippa Bua.

Italy will require the vaccine pass to enter restaurants, cinemas and theaters from Monday.

In South Africa the Deputy Health Minister Sibongiseni Dhlomo confirmed that the country was in its fourth wave.

Dhlomo also said that just 2 percent of hospital admissions were among those who had received jabs. “A whopping 98 percent were not vaccinated,” he said.

As the country that first identified and alerted the world to the new threat, the next few weeks will be crucial in understanding the level of threat it presents.

While there has been a rise in children being admitted to hospital for COVID-19, an official at one hospital near the capital city Pretoria, said infections have so far been mild.

Its unclear exactly which variant the children are infected with, but its suspected omicron may be driving the country’s fourth wave.

Ntsakisi Maluleke, a public health specialist in the Gauteng province told Reuters news agency that out of 1,511 COVID-19 patients, 113 were under the age of nine, representing a higher proportion than seen in previous waves: “We are comforted by clinicians’ reports that the children have mild disease.”

Scientists are still trying to determine what is causing illness in younger age groups.

Australia has reported 13 cases of the omicron coronavirus variant in Sydney, its largest city, and another infection in the state of Queensland. The spread of the new variant comes amid plans to reopen the economy.

Federal authorities are sticking with their reopening plan, hoping omicron would be milder than the previous strains. State governments, however, are moving to tighten their border controls. The country reported its first locally transmitted cases of the variant on Friday.

Thousands of people protested at the parliament of Melbourne on Saturday against the latest wave of coronavirus restrictions.

About 91% of the city’s 5 million inhabitants are fully vaccinated.

The Cook Islands reported its very first case of COVID-19 on Saturday just as the Pacific island nation began reopening to tourists.

A 10-year-old boy who was in quarantine after arriving from New Zealand on a repatriation flight with his family on Thursday tested positive, Prime Minister Mark Brown said in a statement.

About 96% of the island’s population of 17,000 people are double-vaccinated, giving it one of the top vaccination rates in the world.

Authorities have mandated vaccine passes for people visiting restaurants, cinemas and other public spaces, and reduced private gatherings to six people in the greater Seoul area, from the current 10, starting Monday.

India detected its third case of the omicron variant on Saturday as 415 people died from the coronavirus, with the total number of infections closing on 35 million.

Health officials said a 72-year-old man who had lived in Zimbabwe for decades and returned on November 28 was the latest omicron case.

India has pushed down a record surge of cases in April and May and managed to fully vaccinate half of its 944 million population.

In an October 24 broadcast, the president said that “official reports from the UK government suggest that fully vaccinated people …  are developing acquired immunodeficiency syndrome much faster than anticipated.” Doctors and scientists have rejected the assertion.

Rio de Janeiro on Saturday canceled the city’s world famous New Year’s Eve festival as the first cases of the omicron variant were discovered throughout the country.

Rio Mayor Eduardo Paes said he was announcing the decision with “sadness,” as the celebration attracts millions of tourists every year.

Brazil has so far detected six cases of the new COVID-19 variant, three in Sao Paolo, two in the federal capital, Brasilia, and another in Rio Grande do Sul.

The United States has confirmed a further spread of the omicron variant after reporting its first case earlier this week in California.

The new variant has been found in six more states — New Jersey, Maryland, Missouri, Nebraska, Pennsylvania and Utah. Experts, however, said the delta variant likely remains a greater threat as winter sets in and people gather for the holiday season.